Changing Our Small Part of the World

There are times when I have to pause and consider what Sidney’s life will and has already become as a result of adoption. Today was one of those days. As I read one of the many yahoo groups, I have joined with other adoptive parents, one post, in particular struck me.

Someone on one of my boards was adopting a boy with issues very similar to Sidney’s. Remember, many times we literally forget about Sidney’s hands and leg. We want her to be confident and never let this discourage her or stand in her way. This particular adoptive parent was told that children with such outward differences receive about 6 years of education and never go to high school much less college. When they go to school, they are placed in a special school with mentally retarded children (my apologies if this is not the current PC term). I got that familiar pit in my stomach. Sad because children with a severe delay should also receive more education and be allowed to reach their full potential.

As I write this Sidney has tried to open a package of post it’s, attempted to open my grandma’s hutch, tried to jump out of my lap head first, whined for goldfish, and tried to sing along with Diego. I want to scream, but I know I cannot change the world! We can only do what we have already done to change our little part of the world.

Reading this was good. Though Sidney’s special need is minor in comparison to the challenges which many adoptive families face, there are days when I feel a bit of a weight, as I am sure any parent feels with a special needs or non special needs adoption. Again, we hesitate to use the phrase special needs, because I am not seeing any special needs when Sidney functions on a daily basis!

We GET to do this for Sidney! Wow! What an amazing thing, that we are the people who will facilitate the care she deserves and watch her grow to all her potential!
Posted by Hunan Mommy at 9:39 AM 1 comment: 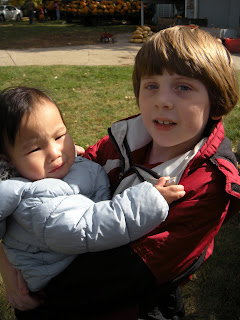 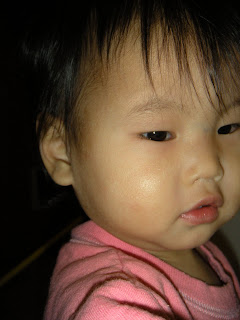 Turns out, we were right about Sidney’s easy going nature traveling. Sidney was amazing traveling home from China, but we were unsure if she was in shock and tired. Minneapolis is a bit further than our travels home from the Des Moines airport, and we headed north over the weekend. She was all smiles and giggling much of the time as big brother provided entertainment in the back seat. Eli dealt well with sharing his beloved DVD player for the first time. It was the ultimate insult when he had to watch Sesame Street, something I am quite certain he will not admit.

We saw very close friends Friday night. It is always great to LAUGH! This was much needed comic relief. Everyone that knows us knows we drive OLD vehicles in order to be able to fund the adoption, and because Tom and I are such tight wads. The terminal rust which is starting to develop above the rear passenger side has become the ’95 Nissans signature look. Tom’s much newer truck, manufactured since the millennium, has gone 7,000 miles without issue.

As we were rounding a curve on Hwy 218 headed north, something obviously was going awry as the power steering went dead. The beauty of living in Iowa is that we were able to park the truck and drive away in a rental vehicle within a span of 20 minutes! Have I said I like living in Iowa? I LOVE the city and our time living in Chicago, but when things like this happen, Tom and I have to gloat a bit!

The best part, as I stood inside filing out rental paperwork for the car, was a breathless woman who charged inside telling me, “do you know there is antifreeze dumping out of the bottom of your truck?” From that point on, I dubbed the truck the “antifreeze blaster. “ A Monday morning call from Tom delivered the news of a thousand dollar repair. Who cares about a car repair? In the grand scheme of life, it really does not matter. At some point, we will stop driving old vehicles and this will a story for Tom’s file of many, many stories.

I forgot the memory card for the camera, but Sidney went swimming for the first time this weekend. She loved it! As we slid in on the stairs to the 5’, she did not even so much as flinch. That’s MY girl swimming without fear!

We spent the remainder of the weekend seeing Tom's extended family and enjoying their company very much. Sidney is only the second girl in the family, if that tells you how many little boys were running around. Eli was in heaven. It was great to see Sidney jump in playing and seeing how loved she is by everyone!
Posted by Hunan Mommy at 11:27 AM No comments: 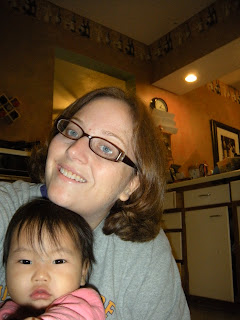 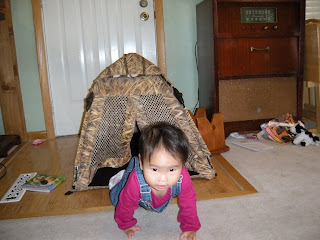 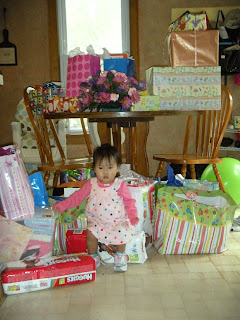 I refer to fall as the “season of the single parent,” because Tom works in the heating and cooling business. For those who are unaware, I will backtrack. Tom works for his regular employer by day, and a few nights a week he does work under our own business name. I am running around like a mad woman with Eli taking Taekwondo and in Boy Scouts. He loves both and never complains about all the activity. He seems to thrive under the chaos. I have always vowed not to have over scheduled children, so these are the only things he is involved with. Let him be a kid some of the time, there is plenty of time to be stressed as an adult! Taekwondo is only ½ hour, and it is better than letting him sit idly.

Sidney has turned into a complete dare devil. The gate down for even a second is invitation for her to scale the stairs at record speed, actually climbing faster when she sees mom coming and sternly saying, “Sidney Ningxia.” Her walking has improved even more, and we continue to see more and more of her personality. Cleaning is common amongst kids from China, from what I gather from other adoptive parents. Take a look at what she was doing in the dirty dishes about to go in the dishwasher. She was able to snag a baby wipe and start cleaning them. She started to take a cup out and wipe it off. Something more comedic is the photo of the tent. Guess what happens when Grandpa and Dad are avid duck hunters and the free tent is too small for the hunting dog? They have had so much fun. Also take note of the Teddy Grahams she snagged the other day.

Much to my chagrin, I have found that the availability of cold remedies on the drug store shelf has drastically diminished. We are in the process of fighting and ear infection and cold. I have not taken care of a sick toddler for 6 years. I sarcastically give a shout out to the FDA who thinks it has the right to tell me what I should not be giving my child. Tonight is the first night where I think she might be resting peacefully. I have been giving her Benedryl, because it is all that is available outside of Motrin and Tylenol.

This week was a week of many positive things, despite the funk going around our home. Our church congregation gave us a baby shower. This was quite unexpected and when our pastor’s wife came to us, we were really surprised. Such generosity from so many people. Sidney has some beautiful clothes, and they had gifts for Eli. Just another reminder that God has watched over this entire process. To say our hearts were full would be an understatement.

I will end on this note. Eli was playing with Sidney and I tonight, and told me, “Mom, I am going to love her forever and ever, but don’t tell anyone at school.” Wow, that just made the three years waiting and everything else seem like nothing! Leave it to him, to put it all into perspective.
Posted by Hunan Mommy at 11:04 PM 3 comments: